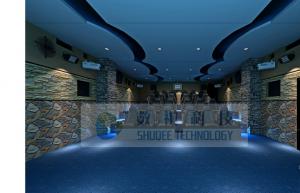 Supply Ability : 50 sets in one month.

7D cinema is made of by three-dimensional film and the surrounding environment simulation which called four-dimensional space. It is based on 3d movie then adds special effects, new video products formed in the simulation, trough linkage to the audience and movie content to stimulate or enhance the immersive effect. When the audience to see the stereoscopic film, along with the film and television content change, they will real-time feel the storm, lightning, rain, vibration, spray, leg sweep and so on functions, cooperate with the three-dimensional image.

The motion chairs have features such as water, jet, vibration, leg sweep. Environmental Simulation Theater with the snow, rain, lightning, smoke and other special effects equipment inside, and create a consistent environment of a video content, immersive and thrilling effect. Audience can feel the visual impact. Compared with other type of cinemas, with prominent theme, high technology, realistic effects, entertainment and other advantages.

Special Effects as below:

Simulate lightning scenes in the film, emitting a dazzling lightning, accompanied by the roar of lightning, so that the audiences feel like being at the height of summer thunderstorm days.

When the film for a rainy pictures, raining falling down. The audience will truly feel at this time rain fall from the sky, moist his hair and cheeks.

Snow machine can efficiently and quickly to man-made snow falling down, making the snow full of the cinema. The audience in the world is dressed in white.

In the underwater world and underwater divers, aquatic animals and plants will spit out a lot of bubble, the bubble machine blown bubbles floating in the cinema.

Simulate the wind. Simulation scene in the film blowing scene or a mass of gas flow, a few fan works can make whole theater airflow movement at the same time, the effect of the real wind

Simulation of the fire, flame effect. Combining with the smoke simulation, scene of combustion and flame, foil hot atmosphere.

Special scenario simulation of light, such as discos, concerts, glaring color light; simulate the atmosphere of the film.

Simulation scene in the film, like scent or strange taste simulation. Take the sense of smell on the true feelings.

There are more than 30 kinds of customized effects in the films, like broken beams, bridge cutoff, electric shock, ribbons, and fireworks etc.

All the whole system can be installed according to our Installation Instruction CD and Manual; Or we send our engineers to help you install.

Control system is free lifetime and is updated; 2years free for motion chair; 1 year free for other equipment, No warranty of consumables.

Shuqee Tech. integrate the latest scientific and technological achievements, and has invested heavily in independent research and development of digital, intelligent, immersive 4D cinema six systems, with many patents. The main businesses are 4DM Theater building, 5D & XD Cinema. Company's products through a global marketing network, not only meet the domestic market demand, but also have been exported to more than thirty countries. Our products widely used in Cinema, Scenic, Commercial Centers, Theme Parks, Science Hall, Education and Scientific Research etc. Except 4DM Theater, also focus on the development of related diversified industries like the digital home theater, the center control system development, interactive simulation systems etc, with the joint development of the main businesses.

Thank you! Your message has been sent to the following suppliers.